Doug Ellis speaks and a question of faith

Doug Ellis has spoken to Bill Howell and well, it is worth a post because Doug Ellis is Mr Aston Villa. Well, Mr Aston Villa was the name he got but I'm not sure where from and what he has to say is actually quite interesting.

He has predicted that Gary Gardner, brother of Craig, who is going nowhere this summer, is doing to be a better player than his older brother and he fancies that Marc Albrighton will get a look in this coming season. It is all positive stuff from our former Chairman.

But, rather than me talk about what he has said, I'm going to put it here and let everyone have a read and digest it. The last paragraph, I suspect, might get highlighted by some and maybe it is our previous Chairman saying something but not saying something.

Doug Ellis, June 25th 2009
There are grounds for optimism. I certainly don’t think anyone should be negative about the future of Aston Villa. It is on a stable footing. It has a good manager and good coaching staff and in addition they have some good youngsters coming through. They need to replace Martin Laursen, in particular, and Gareth Barry because they were two of the most important players we have had in the last year or two. I’m sure they will replace them.

I don’t want to appear to be giving any advice to Martin or Randy because they know what they are doing. I’m sure they know the most important players to replace are Laursen and Barry. They may be up against it next season but as I have said so many times, money itself does not guarantee success. I don’t have to tell Martin or Randy what the opposition is, they know it already.

I believe Gary Gardner will be an even better player than his brother Craig. A number of the youngsters are showing they could make it and they will get the opportunity, I’m sure. Martin O’Neill has shown he won’t shy away from putting them in. His usual method is of putting them in for a match or two and then pulling them out. Giving them a smell of the first team.

Can Villa break the top four? There is no specific answer but money and money alone cannot bring success. In 1968 we were broke. We could not afford to buy. We had to breed. I put money aside for what is now the Academy and brought in Frank Upton, who had coached my son at Repton School. It was only £10,000 but it was enough for, although not immediately, the likes of Brian Little, Gordon Cowans and Jimmy Brown to come through. So it’s all about having a structure in place, including youth development. Youths alone will not win you anything but you can get the right mix between experienced players and good youths, with one or two getting a taste for it and progressing.

That’s true but at the same time you have to look at the overall picture. Villa have remained a member of the Premier League right the very beginning. At all times they have been stable with little or no bank debt at all.

I made a promise to myself that I wouldn’t interfere once I had shaken hands with Randy Lerner, and I haven’t interfered. By and large he has kept his promise and I am delighted I chose him ahead of the other four predators. 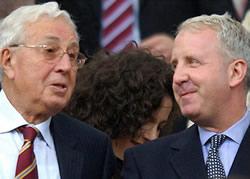 Now, he can't help but give himself a bit of praise, but you sort of have to accept that from him and he also says that 'money itself does not guarantee success', although that sort of suggests that it is a factor. In fact, we know it is and I for one believe him and I also don't think we have seen enough from our new owner, but that may change this summer. I hope it does.

But the question of faith comes now. I saw a headline the other day where a website was saying that as Aston Villa fans, we must keep the faith. What is faith when it comes to supporting your football club?

It is a serious question. I know what faith generally means when talking religion but about your football club, I'm not so sure. I have hope but that hope is very much around how much money is going to be spent because like Ellis says, we have reason to be optimistic. We have possibly the best academy in the country and a reserve team winning week in week out.

Our infrastructure is as good as the top four and better than a lot of other club, but faith, where does it come in and how do you define 'keeping faith' when supporting a football club? Answers on a postcard please or better still, comment below.

Competition Time: Click here and guess how many visitors the site got on Tuesday to win a t-shirt of your choice from Soccerprint.
back to top