Curtis Davies - A view from the Walkers Stadium

With numerous commenters making the same point about the calamitous form of Richard Dunne and James Collins, and with Carlos Cuellar only just fit again and Ciaran Clark still a little wet behind the ears at Premier League level, I've been doing some digging amongst the Leicester City supporters clubs and bloggers to find out how Curtis Davies is viewed over in the East Midlands, whether we can expect him back - and whether we'd want him back.

I like Davies. Once he had got over his initial "pub player" problems, he settled down and started to look not only solid but skilful too. Whilst I also thought he had a tendency to get caught out of position, he seemed good in the air and in the tackle, and at times looked not unlike Rio Ferdinand when bringing the ball out of defence. Given our debate over the way in which Villa move the ball out of their own third these last days, an on-form Davies could be a real asset.

Foxes blog, The Blue Army, though, seems to think that there is a decent chance Davies will sign a permanent deal come January. He seems to be settled and enjoying life at Leicester, and - perhaps even more worryingly - he doesn't seem to have a clue where he stands with Gerard Houllier. See this link to a very recent Blue Army post.

I don't want to get on Houllier's back too much...I've given him a fair deal of stick already this week. But wouldn't it be fair to expect that a central defender who cost Villa £10m, is just 25 and was in Fabio Capello's plans apart from long-term injury might carry some priority?

I would expect that Curtis Davies, by this point in December and with his (extended) loan due to end on 3rd January 2011, would have a fair idea whether he is to be recalled to Villa Park and whether he has a future at Aston Villa Football Club.

As I've said, I like Davies. I'd be quite content if Houllier announced that Davies would be returning to Villa on 4th January and that he was a key part of the Frenchman's plans. But that's only my view: I thought I'd share with you a few of the comments I've received on email from The Blue Army's readers/posters:

He is a class act - I could not big him up more. We need him or at least someone of his calibre to help us get into the Premier League
He controls the defence amazingly and you can tell he is 100% a Premiership player. If we were to get him permanently in January it would strengthen our side no end
In the air he's a very strong player and rarely gets beaten to a header
He is a great player and should walk into the Villa team, let alone Leicester. I don't think Houllier realises what a player he has
He never gives up, is committed in tackles, helps to shape the defence and line it up tight, likes to go forward and is strong in the air

There's a lot of encouragement in those comments. With all due respect to our friends over at Leicester, this is made in the context of a side playing mid-table Championship football, but even so the point is made that he looks every bit a Premier League player.

We'd have to ask ourselves whether this sort of form would be transferred to a side playing against often world class forwards - and we'd also need to show a little concern about some of the less glowing stuff which emerged from The Blue Army community:

His ball control is not the best - sometimes the ball slides under his feet. And at times his passing has been questionable
He can expose the defence by getting too far forward
Sometimes if we give free kicks away, he can get in a tizz (sic) and waste time moaning at the referee 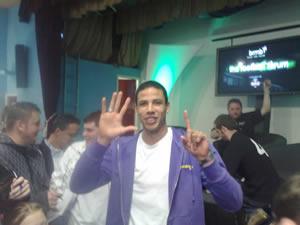 That last point worries me slightly, as over the last three league games Ashley Young, I calculate, has spent 58.37% of his time on the pitch moaning about decisions and only 41.63% playing football: we wouldn't want another one. (Before the comments come, though statistics are made up).

All in all, I'd like to see a fit and on-form Curtis Davies back at Villa Park in January - playing alongside Carlos Cuellar, for me. And I do think it's pretty important that Gerard Houllier takes some time to make him feel part of his plans, before he decides to commit his immediate future to Leicester.

Thanks to the guys over at The Blue Army.