If you saw the game last night, there is nothing that I can write in the opening paragraph to justify things, so instead, I'll let other do the talking. Instead, I'll wish the Irish a happy Saint Patrick's Day, or Beannachtai na Feile Padraig and seeing as I have a bit of Irish in me, I'll be celebrating tonight, just for the craic.

Right, got that out of the way and I really don't know where to begin, so I'll start with the points that spring to mind immediately. Our first was an own goal, Wigan got an equaliser very quickly, we really could have had two or three more last night and apart from the first twenty minutes or so and the last five or ten, it was all Aston Villa. Oh, and James Milner was man of the match, but an Irish mile.

Stuart James, guardian.co.uk
With this fixture having major implications, the natural assumption might have been that a cautious game would unfold. Instead Villa and Wigan tore at each other from the outset, contributing to a highly entertaining match that yielded numerous chances at either end of the pitch. Indeed the only surprise was that come the interval both teams only had a goal apiece to show for their efforts.

Ian Whittell, The Independent
The remarkable season being enjoyed by James Milner and his Aston Villa team-mates continued apace at the DW Stadium last night when the versatile midfielder came up with the goal that earned his club three potentially vital points in their quest for fourth place.

Martin O'Neill
James was extraordinary tonight. It was an extraordinary performance from a really, really good player. Since he stepped into central midfield for us, his game has gone up tenfold, really. That is his best position and he continues to go from strength to strength. I think he has added more to his game. I understand that sometimes, when you are playing out wide, you are dependent on other people giving you the ball and getting you into the game.

The Players and Some Stats 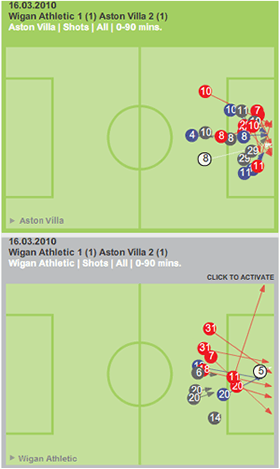 Like I said earlier this week or last week - I'm not looking at passing stats until the football gets better, but I will look at the shooting stats, only because it stands to reason that the more shots you have, the more goals you are likely to score. Last night we had 21 shots in total; five on target, eight off target and six blocked. You can see on the chalkboard to the right where they all happened and in comparison to the 13 shots in total that Wigan had.

For the most part last night, we dominated and these numbers just go to back that up.

I haven't seen such a convincing vote for a long time and there are no surprises, the man of the match vote goes to James Milner with just over 80% of the vote. The Ginger One comes in second. Poor Stiliyan Petrov only got one vote.

We went for it last night, which meant the match was entertaining. Whenever Wigan attacked, we defended as expected for the best defence in the league and then we moved forward and you can't help but have expectations when we attack as it is quick and we don't seem to waste time - we just seem to go for it.

An entertaining match and one that will, hopefully, inspire confidence ahead of Wolves on Saturday. I think it will and while Wolves are desperate for points, I don't think they are going to bring enough to the party to leave Villa Park on Saturday with anything. We could, mathematically be fourth come 3pm on Saturday although if we win, it is more likely we will be fifth - unless James Milner dons his cape.

I'm off to put a dash of Jameson in my coffee.