Post-mortem: A point, some stats and learning to walk

Some seem to be running before learning to walk again. Yes, the result was disappointing and you've got to fancy a home win against Fulham is the most likely result and if you don't you've got to start thinking bigger, but as someone so politely reminded me, it is a transitional season.

Yes, I bang the drum, but it is. Next season will be much better, but this season isn't over yet and we can still move up the table and if the manager just wants to know how that is going to happen, all he has to do is look at his former club. But, I'll get to that in the final analysis.

Sandy Macaskill, The Telegraph
Either Fulham and Aston Villa forgot to eat their cornflakes for breakfast, or someone needs to remind them that residence outside the relegation zone is no excuse to stop fighting. True, by the time Lee Mason called an end to proceedings it had developed into a decent enough scrap, but for too long this match flickered like a faulty torch.
Barny Ronay, The Guardian
This was a match of few clear chances and little sustained attacking in which all four goals seemed to come out of the blue. A major plus for Fulham was the fine display of Andrew Johnson, who scored the equaliser seven minutes into the second half, stooping to head in a difficult bouncing ball after Brad Friedel could only parry Steve Sidwell's shot from 20 yards.

Gerard Houllier
I think we dropped two points. First of all, we had a chance when we were one-up. There was a movement down the right and unfortunately we couldn't get to the end of the cross. It could have been a 2-0 lead before they equalised. I think their first goal affected us. Before that it was fine, we were controlling the game. They were not a major danger but once they scored the first goal their confidence grew and ours probably went down a bit.

I'm doing this old school from now - images. All you have to do is click the image to the right and up will pop another image and it will show you who won the vote. I'm using images because I'm a simple man, but also because I'm bringing something back today that deserves an image and you've probably seen it below. 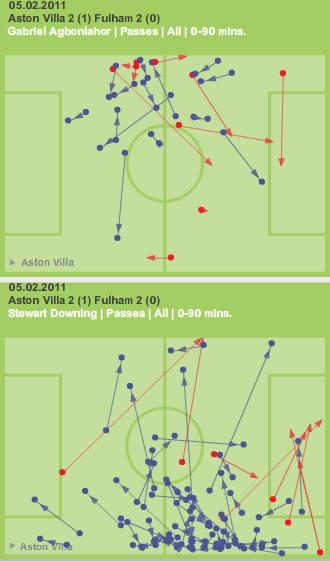 I left the statistics section of this post out a while ago because it was the same thing every time - we were not passing enough and we are hitting long. I know it wound a few people up and I don't mean it to sound too simple because it isn't just about passing, but it is a good indicator.

If you look at the league table of passes made at the end of the season, the chances are very high that the top four will be the top four of the actual Premier League table. You don't score if you don't have the ball and if you have it, the other team can't.

It is also about movement, making space and having the right players on the pitch, but we are getting there.

For now however, the table to the right shows the passes made by Gabby at the top and Downing on the bottom. You know where I'm going with this, so I'm not going to bang the drum.

Bottom line, Downing will get the ball on the left or the right, but Gabby is wasted on the wing and we have a very energetic and very good right winger wanting to play every game. Downing must play on the left and Albrighton must play on the right - but this is just my opinion and I'm sure the manager will get to that eventually.

But to end today, my reference to Liverpool FC above. Since Kenny Dalglish has taken over, Liverpool have gone out to win every game. We have gone out not to lose and we have gone out in the second half a few times to protect what we had and that isn't going to work.

Overall, I'm not unhappy about where we our and the progress we are making. It is, after all, a transitional season and we have to learn how to walk before we can run, but we need to start to see development and results coming our way, because if that doesn't happen, well, we will all start to get a little worried. But please, for now, don't panic, all is as it should be, all things considered.

Man of the match, if you couldn't click on the image, was Jean Makoun with 41.9% of the vote.
back to top