I've got faith in Garde, the chart, December an important month and a great half of football for Aston Villa

A great half of football means nothing if you lose the match. But I have to say that the first half yesterday was the best I've seen from an Aston Villa side for a long time. And this is the part that is important to point out; it appeared part of a plan.

But it means nothing if you then go and lose. And it surprised me that we didn't come out for the second half like we did the first or even how we ended the first and it did take some time to get going. But that's football and I'm sure Rémi Garde will learn from that.

And I hate to harp on about this, but we let in three goals .... again. Something needs to change defensively. And I think it's fair to say that something needs to change going forward too. We had over 60% of the possession yesterday but less shots than Watford. And I need to stress this; we're not out of this yet, but remain in the brace position.

Yes, we're close and we scored twice yesterday. We haven't scored twice in a match since September and it's something to take some comfort from. But again, I need to stress this; things need to change at the back. I wrote it yesterday, so this isn't a reaction to conceding three, it's just that this needs to happen.

But we're entering a very serious time. There are two home matches left until the end of the season and the transfer window opens in a month. The business of this transfer window needs to happen early and we need to by then have picked up a few more points.

Where we are and what we need

To illustrate this, I've done a graph - this will be updated with results - but the long of the short is that we need to win and draw one of every three matches to stay up this season from the time Garde took over. The green area is what we need; a draw, a win and a loss, between now and the end of the season to get to 40 points. The red is what we have - from the first match against Manchester City. 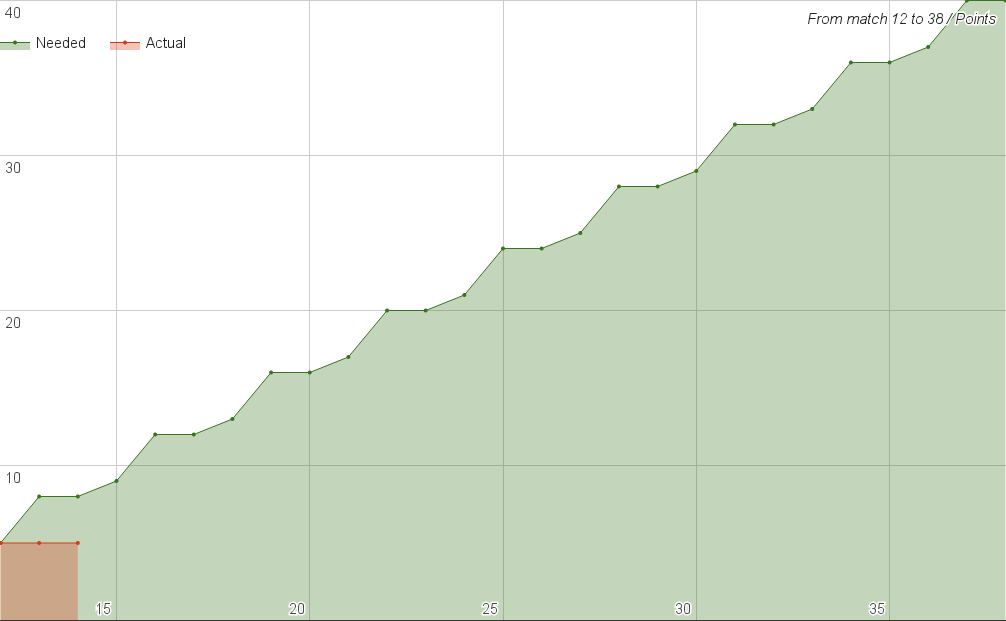 So, seeing as I've stated the obvious, I'll leave it with the obvious and say there are five games in December against Southampton, Arsenal, Newcastle, West Ham and Norwich and we need to win three of them just to go into the year with a chance. And even if we win three of them, it's extremely likely we'll still be in the bottom three. Now is the time for serious business and we need more of the first half yesterday.

By the start of January we may know our destiny and if we do, don't expect Randy Lerner to put his hand in his pocket. But expect Tom Fox to be sacked and a proper football man brought in.

So with that written, I'm going to leave you now. There is nothing more I can write that I haven't written before so many times. There is now nothing we can do other than put our faith in Garde. I like to think he'll do it and I hope he does. I also think it's more positive to have that faith rather than to assume we're down. There is a long way to go this season.