Potential and opportunity, Brigada 1874 and Newcastle

There is an element of feeling okay about the result and performance yesterday but at the exact same time there is still the acceptance that we've only played Newcastle and Stoke, so if we are to accept four points from those two games and that things are looking good, we're accepting, to some extent the unknown.

Or, we're accepting something temporary. For me, it always has been October and I'm sticking with that. In two matches, I think we've had one shot on target and I think that is why I'm not getting carried away with the word progress, even if clearly I'm seeing something different.

For me, progress is top four. Progress isn't moving up three places. Sure we can argue the merits of what exactly is progress and you could easily argue that finishing 10th is progress, but for me it isn't, but I'm trying to look at the bigger picture.

Something to get behind: Brigada 1874

It's a little like Brigada 1874. Now, don't get me wrong, I love what they're doing, but look at the banners they put up yesterday and the players they were suggesting as their heroes; Gabby, Mellberg, Dublin, Collymore and Taylor. Now, just because they are heroes to that group doesn't mean that they are heroes to me or anyone else.

It's a little like me thinking Aston Villa are one of the biggest clubs in the country with the capacity and potential to be challenging for the top four and then, with a new owner or investment, even more. It's like how in that list of five players from Brigada 1874, I'd only have Mellberg and Taylor and if I had to pick three more there is every possibility that the members of Brigada 1874 might never have seen them play. But I don't know that for sure, but it feels that way if Collymore, Gabby and Dublin can make the list.

It's about age and context. They're not wrong in picking the players they've picked, but I'm also not wrong for thinking Aston Villa have the potential to be playing in the Champions League or that we've got legends at the club that have won everything. Liverpool went form 7th to 2nd and Manchester United went from winners to 7th. Football is all about potential and opportunity. 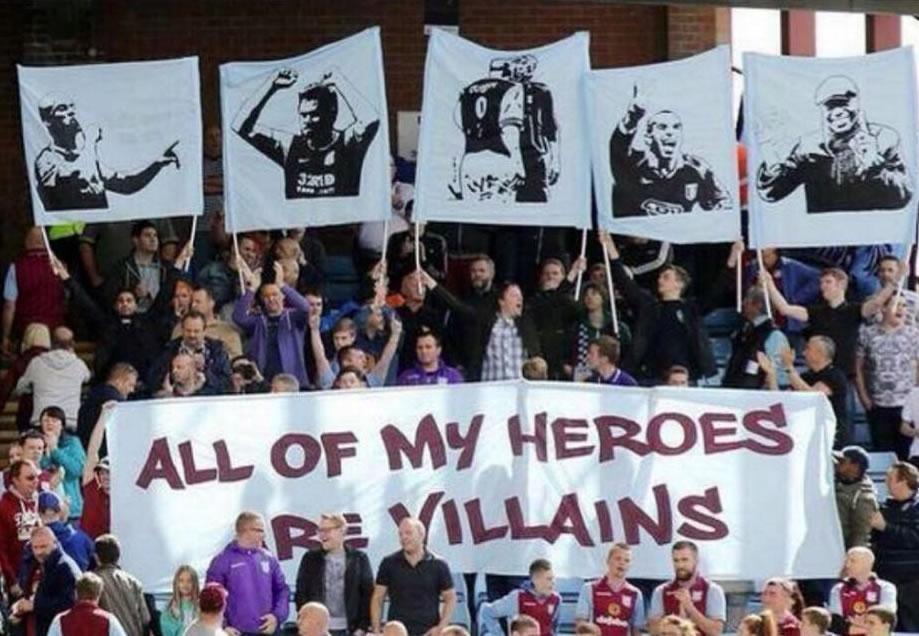 A point against Newcastle

Which is a little why I like what Brigada 1874 are doing, in more than one way. There is nothing to stop someone else in the stadium to put up a banner saying something else or contradictory to what they are saying. Which is why I agree with most others that yesterday was a decent performance.

I tweeted at half time that if I had to pick a man of the half it was going to be Alan Hutton without a doubt and also why I said that nobody could deny that there was definitely something different about this Aston Villa this season.

Now, it could be the likes of Hutton, Richardson, Senderos and Cissokho that mean we want to play football on the ground and chase things or it could also be the manager and Roy Keane. Either way, four points from a possible six isn't bad and it's more than Manchester United are going to have.

But, we've played two sides that will finish out of the European places and probably between 8th and 14th, so as things stand right now, I'm not getting that excited.

But last season we did better against the better sides, so if we can beat Hull next Sunday, it will set us up perfectly for a very big September and if we can get through that relatively unscathed, then we'd be entering October and you all know my views on October.

The first half yesterday was very good, but we wasted a lot in the final third or maybe wasted is the wrong word, were not very clinical in the final third, or that aware of what the final third was. But that will come when Benteke is fit, because I can see Weimann getting moved to the bench and maybe even Gabby too.

But while we can all argue on the definition of progress or what makes a club hero or legend, I think we can all agree that there are reasons to be positive. Lambert was never my choice because he was always going to need time and patience and he had very little experience. But, we've had two games and nobody is suggesting that he has to go.

Still a lot of games to go, but if we beat Hull next Sunday, we'll all be feeling good. Not to mention Leyton Orient in the week, which believe it or not, is a hugely important game for us. But until Tuesday, I'm going to cut my grass.