Gutted, time for change, AVTV, a video and the return of the chart

I have to start by saying how gutted I am. Had we won yesterday, it would have been the best start to a season since the 1962-63 campaign. Imagine that for a moment. Most of us here were not even born when that happened and those that were might not even remember it.

But you know what, after three games last season we had three points. If anyone says we're not doing better this season, they've obviously got another agenda, because the numbers don't lie. But at the same time, it's now time for change.

And that change has to come in the form of playing players in their preferred position and telling other players to do the right thing. You can't play a midfielder at centre back and him just hit the ball long when it comes to him and you have to tell the striker to pass.

I'm a big fan of Jedinak, but you need a player that is used to playing at centre back and we have one on the bench. He might not be a player the manager likes, but for the good of the team and the way we should want to play, you have to play a player that knows the role. I've also for a long time written about Kodjia and his inability to pass.

Here is the thing with strikers, I like them greedy. But I also like them intelligent. There was a handful of times yesterday when Kodjia should have passed the ball, instead he tried to beat three men. He might beat three men one out of ten times, but those nine times when he doesn't are nine times he should have passed. Passing creates the potential for an opportunity and you only get goals from opportunities.

Someone has to tell Jack to shoot more too. I don't know how many times I've got to say this but for all the lovely passes, he had six assists last season. McGinn has three already this season. The passes are one thing, but Jack should be scoring more and I say this because he's got the ability to make that extra yard of space and so few players have the natural ability he does. Instead of making that space and taking time, he should make that space and shoot.

I'd rather Jack shot five times a game and scored one in ten and I think we all would. From those shots are going to come other opportunities too; dropped balls and corners. If there isn't someone wide, make space and shoot Jack, you've got it in you and it will mean you're worth more too for when we come to sell you next summer.

I have to write this next part because it's so frustrating. I pay for AVTV and we've had two matches this season. The first match, was a bit of a joke, the picture kept getting lost and the flashing game me a headache. Yesterday, the commentary was four or five seconds ahead of the picture. We heard the goals going in before they did.

I mean, how difficult can it be to get picture and sound sent so it is in sync? Video below for those that want to experience the struggle I have when watching the game.

Yo @AVFCSupport this is why it's not fun to watch the stream. How about engaging with paying customers and telling us when it will get fixed? pic.twitter.com/VQRdm6ePoZ

Finally for today, the chart. I've changed it a bit from the past two seasons and we're now just looking at the last five seasons. As you'll see, we're in a good place. But it's three games and there are going to be times when we dip below lines. I suspect that will happen for most teams - the trick is not dipping below the second line. Dip below that and we're not going to go up automatically. 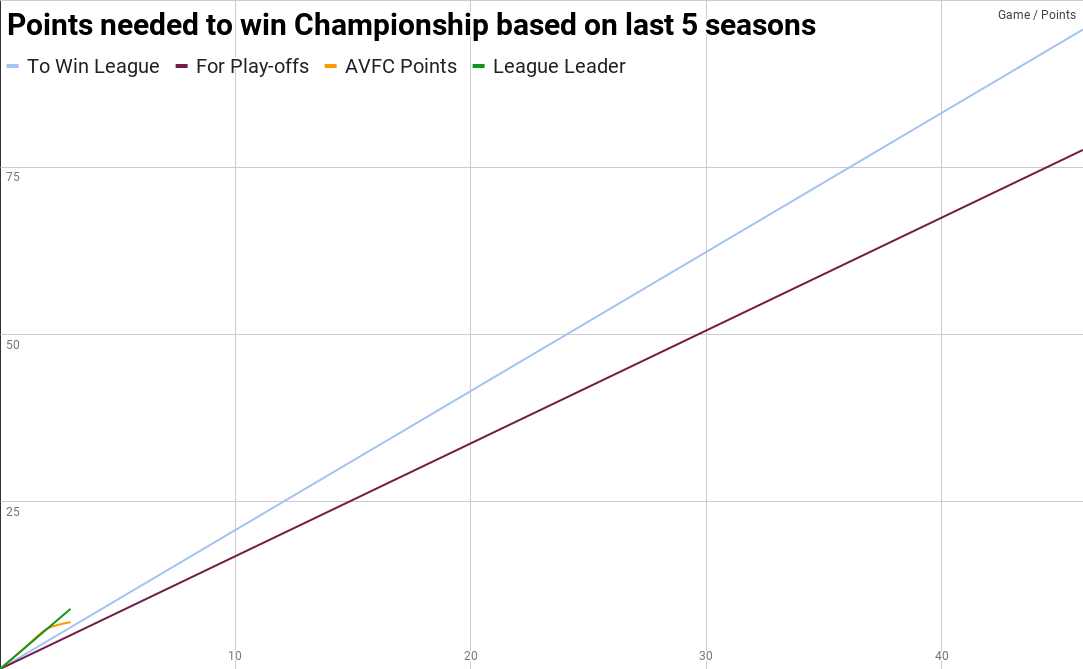