Do Aston Villa need a new striker, Arsenal tomorrow and happy with change

Despite the loss against Blackburn, I'm not unhappy. I'm not ecstatic or over the moon, but the result doesn't really bother me. I accept that sometimes you have to take a step back to move forward and that change isn't easy and can take.

The football under the previous manager wasn't difficult to dissect. It was fairly route one with an emphasis on running and ultimately, for it to get better under this manager, change had to happen and in football that change isn't instant.

Basically, as long as I see the football changing and an emphasis on possession, making space and passing to feet, I'm going to be happy and I accept while that change is happening, we will probably lose or draw more games.

For the football to become fluid and more effective, it is, like I've said, going to take time and along the way and during this process of change, we are going to lose matches, make mistakes but more importantly, we will learn and get better.

Footballers are generally not that clever and they need to burn themselves, once or twice, to know that putting a hand in a fire is going to hurt. Eventually though, a footballer will stop putting his hand in the fire and that is progress. 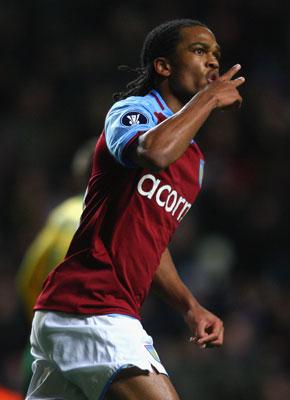 I wanted to mention that above, because we have Arsenal tomorrow and Arsenal play the type of football Gerard Houllier wants to play and Arsenal are a perfect example of why we shouldn't get too concerned with the results at the moment.

The football didn't magically get better the weekend after Arsene Wenger was appointed manager, it took time and lots of hard work, but they do play the way we want to be playing, which is why I'm confident the match tomorrow will be a good one, because we are already trying to play the way that way.

It will be an open game and end to end and a lot rests on Gabby Agbonlahor. Which brings me to my next point; Stewart Downing thinks we need a new striker.

You see, I don't think we need a new striker, even if you look at things at they are right now. I think this is a perfect opportunity to let The Fonz get thirty minutes every three matches and ninety every fourth.

Stewart Downing
We've got one experienced striker at the moment in Gabby and he has just come back from injury. It would be unfair to put a lot of pressure on young Nathan to manage right through the season. If you look at things, as they are at the moment, I would say we probably do need a striker. But we probably need four or five players, not just a striker.

If we are going to play a variation of 4-5-1, which I think we are under Houllier, then I think Gabby is fantastic and I think The Fonz will get better and very soon, we will have Heskey back - is there really room for another striker?

Yes, playing this way means Gabby has to drop back and run the channels but he is good at that; he has strength and pace and he scares defenders into making mistakes and he creates space.

For me, we have to look at the supporting players and dare I say it, I think we are maybe only one away from having a very good midfield. I think instead of making too many chances, we need to look more at how we play and build on what we have. But I think there could be a romantic element in why I think that too.

If we play tomorrow like we did against Manchester United, we will win tomorrow. If we track back, close players down and don't allow them the room to play the type of football we all know Arsenal can play, then break like we did, we really can win.

But, in my humble opinion, we need Webcam on the right and Downing on the left, but that is for balance and fluidity - we don't want them having to come inside to bring the ball onto their favoured foot, we want them to look in inside and see Gabby running the channels and creating the space for the likes of Bannan and Hogg or Clark.

Once again, I'm maybe looking at this with tainted glasses, but I really do think it is possible with these players, given time and opportunities to get better.

So, tomorrow, we will be up early with the live post, but until then, do you think we need to bring in another striker or do you think this is a perfect chance for The Fonz? Question below.