Social media, losing at Leeds, a sensible January and the chart

Most of you will know this, but I tend to take positions. One is that it will only be me writing on this blog in the future and another is that Gabby Agbonlahor isn't fit to wear the shirt. I also had fairly firm opinions on the previous manager and pretty much all those before him too.

I hope though that those that read the blog appreciate that these opinions don't just get plucked out of thin air. I mean, I had nothing against Roberto Di Matteo, I simply accepted that when we appointed him we also had to accept that we would be in this League for more than one season.

I also didn't dislike Alex McLeish, I didn't know the man, but I was a dark day for Aston Villa. As for Lambert and Sherwood and all the others, my view and opinion was formed with everything in front of me and common sense. That things have turned out to be fairly spot on isn't rocket science, it's just common sense.

It's why I know Steve Bruce will get us promoted. It's also why had he been appointed when Di Matteo was appointed, we'd be top two right now and why, because he wasn't, we might have to have another season in the Championship, but these things are determined not by the players or Bruce, but by the owner and the CEO.

But because we didn't win at the weekend, you'd think that it was only the players to blame. Since Bruce took over, it's been great. Not only because we've been winning or not losing, but mostly because players and manager have not had any negativity on social media. But after the defeat on Saturday, it's like people were waiting for a reason to have a go at a player and everyone has their own special player.

For me, it's Gabby, but I simply refuse to accept that he should be allowed to wear the shirt. That I'd probably have scored some of the chances he has had in the last couple of appearances, just goes to prove the point I've had for years, that he isn't good enough. Not even in the Championship. But some of the dogs abuse some of the players have been getting is just shocking.

For me, whatever I write about Gabby he deserves and all we have to do is look at how he took a huge shit on all Aston Villa fans last season.

Shall we be sensible about January?

And we also don't need more players in January. Or we didn't until we lost, but now, some of you would have us changing the entire midfield and getting a new striker come January. Are you not aware of what so much change brings? The job of the manager is to manage. Not to have excuses for why it's not working because of new players.

We don't have the luxury of a season ahead of us. We have an opportunity to get promoted and that will be best achieved with as little disruption as possible and the manager given the time to get the best out of his players - i.e. manage with what is at his disposal. And what is there is good enough.

Sure, I expect one player in and I expect that player to come from Hull, because every manager needs to bring in 'his' player but that is allowed because it's a requirement of the manager. But expecting a new midfield, a new striker, a new right back all in January would only confirm we are in the Championship for one more season. Is that what you want?

We messed up in the summer by appointing the wrong man and by making too many changes. Lets not make a mistake in January.

And for the love of all things Aston Villa, as supporters, let us try and be a little sensible about it. As for those on social media laying into the players, I give up. You keep doing it, because I'm sure it's helping.

And I'll leave you today with the chart. We missed an opportunity on Saturday and if you want to know the truth, it's that we can not afford to lose another in December. Now, that wouldn't have been the case had we appointed the manager at the right time, but this is the position the Club have put him in. It's that or we accept Championship football for next season too.

Me, I want to believe. So I don't expect any more defeats this month. 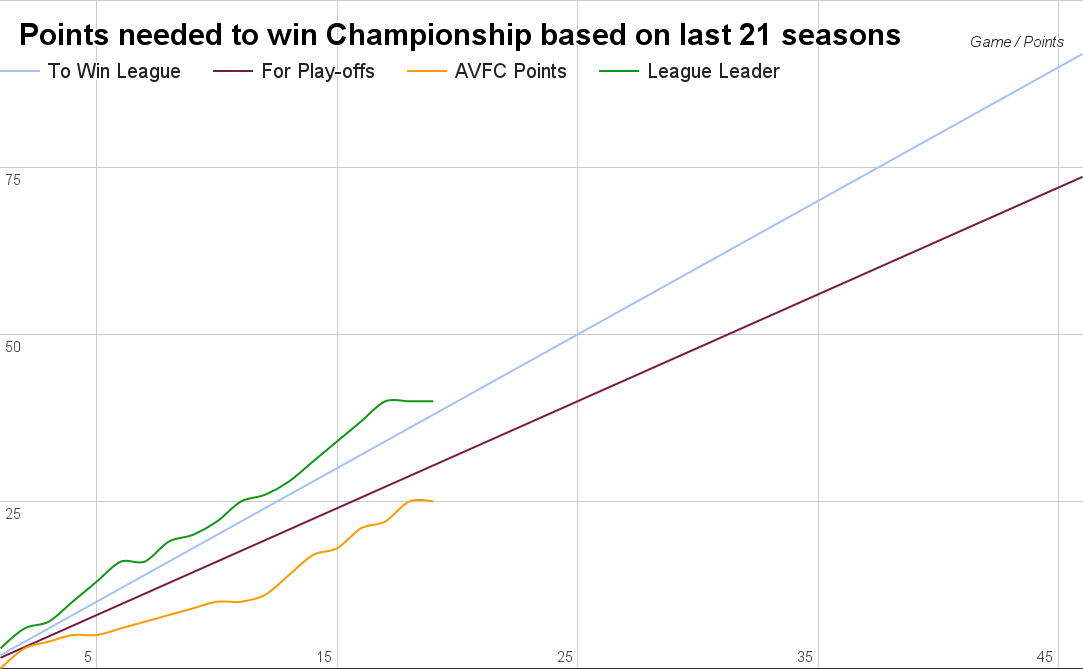