Now that was uplifting, taking more than a point from Brighton and the chart

I'm not sure uplifting was the right word for the title but I know I'm not the only one that is a little disappointed that we didn't leave Brighton with all three points on Friday night. And that is pretty much all down to Steve Bruce and further evidence that he should have been appointed a long time ago. But that is spilt milk and I'm not going over it again.

And as many of you will know, I'm a fan of thinking into the future but I don't want to share my views about that right now, because we're in a really good place. And I still haven't figured out my views on Bruce long term but I have to tell you that if he gets us promoted this season, I'm inclined to give him the chance in the Premier League on the basis that he got us there and if he wants the chance, he should be given it.

I write it like that, because Steve Bruce could have come to the conclusion that he is good at getting teams out of the Championship and that that is his specialty. If it is, he can charge for that. How much is getting out of the Championship worth to a Club? I'd guess it's worth quite a lot and that there will be a Club or two every season willing to take a punt on it. We should have done ... and again, I'm back to spilt milk so I'll stop.

More than a point at Brighton

My point is, if he gets us promoted, it should be his decision. But enough of that, because the Club have confirmed Colin Calderwood as assistant manager so it appears we took more than just a point at Brighton on Friday. And if he has anything to do in making Brighton the team that they are this season and towards the end of last season, then I think we all have to be happy.

But I do want to stay on the match for a paragraph or two because I think the match deserved it. I think also there must be praise for one or two players and a mention for others. First Gabby. You all know my views, but I'm also of the opinion that if he is wearing the shirt, you have to support the team. He ran and ran during the match and that is what we have to accept as what he is good at.

He's never going to score goals aplenty, but if he can chase balls down, it's going to create opportunities for us. Hat off, he did it. He'll never be forgiven for stealing a living and if he is sold in January, I'd not be unhappy to see him go, but he put in a performance. And I hope others don't start writing that, because if he starts to think he has done enough, he'll open contract negotiations. It's the Gabby way.

But more importantly for us Aston Villa fans, I think anyway, was the appearance of Jack Grealish and how for twenty odd minutes, he just seemed to be everywhere and it was like everything we'd read about him over the past few years, just appeared on the night. It was almost as if this was the first time we saw him and he decided to make the type of impression that we'd all hoped he was capable of making.

If we see this from him for the next few games, there will be other Clubs, big Premier League sides, coming in for him in January. But that doesn't bother me right now. I think or I want to believe anyway, that for Grealish, getting us promoted is the most important thing. I do think he will leave one day and if we see more performances like we did against Brighton, I'd not be surprised if it was really soon, but that is because I've been thinking about the future, but again it's why I don't want to write about it now.

But let me get you thinking about it. When was the last time, it felt this good to be an Aston Villa fan?

But before I leave the match, how about Nathan Baker? That goal, his first for Aston Villa, was special and I hope he cherishes it. He's come in for a lot of stick from Aston Villa fans for a lot of years, but some of us saw this potential. It needed the right manager and as long as we're trying to attack, defenders wont have as much to do and because they have less to do, less mistakes will happen.

Baker and Chester are very quickly looking like a very solid pairing and you have to feel sorry for Elphick if these two can stay fit. And yes, I should mention other players and other moments from the match, but you know what they are. Overall, it was a fantastic performance and even though I'm disappointed, I'm still happy.

Right, I'm just pasting the chart below, but I want to point out something interesting. These numbers are based on the past 21 seasons, but the average number of points needed to be in the top six at this stage of the season is 27 based on historical data. If you look at the League table today, it's also 27 points. If anything, the past can tell us what is needed for the future.

And yes, in case you were wondering, if we stay on our current trajectory for the rest of the season, we will finish in the top six. Had we had Steve Bruce form the start of the season - we'd be in the top two. Shit, spilt milk again. Sorry. 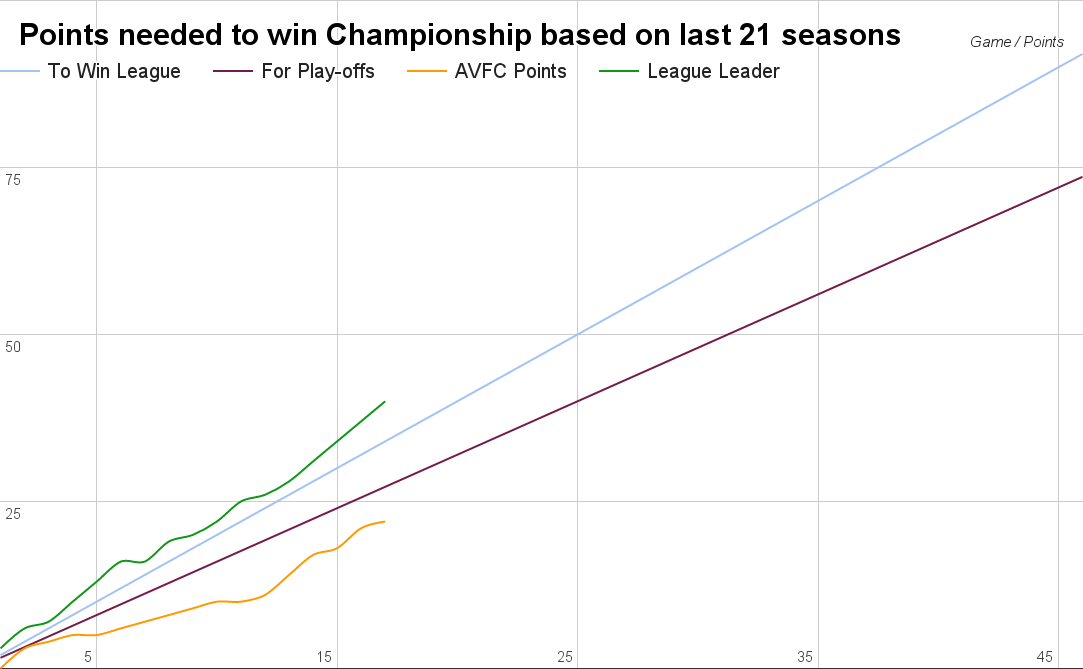