Three moments from 2010 that shaped the year for Aston Villa 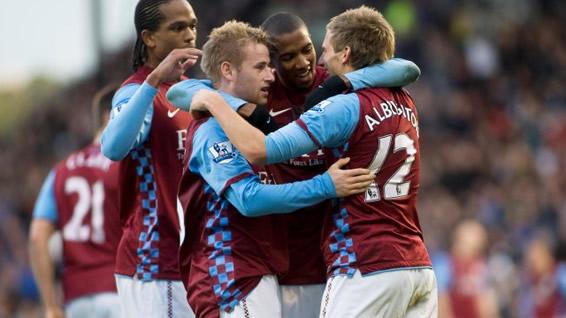 With Christmas coming up and snow on the ground, there is going to be little Aston Villa over the next few days as the focus turns to wrapping presents, opening presents, eating more than is advised and falling asleep in front of the TV, so instead of looking at paper talk surrounding Ashley Young today, we're going to have a quick look at the year.

Okay, we'll take a quick look at Webcam. Apparently, the club are so determined to prolong the England international's spell at the club that they have refused to rule out the possibility of allowing him to run down his contract and leave on a free transfer in 18 months' time. Yes, that was a direct copy from the Guardian and you can read more about it at the link, but remember what the player himself said, when thinking about what might or might not happen.

Ashley Young
There's nothing about me departing. All I'm doing is concentrating on my football. I don't want to be distracted by anything else. I've not said I'm leaving and I'm not taking my focus off football. They don't need to worry about anything with me.

But enough of Ashley Young, I think he's off and I think it will turn out to be a mistake, much like it has for Milner, but some will disagree with that and it is easy too - he is earning a lot more and footballers like Milner don't care about the clubs any more.

I could look at each month and pick something, but instead, I thought I'd pick three moments from this year that stand out in my memory. It wasn't difficult to remember these three and you'll all remember them, but you should be warned, they are not all positive.

But, I am going to start with something positive, even though the end result isn't; the Carling Cup Final.

The day was special. From getting off the train, walking out and seeing Wembley and the image of Martin O'Neill hanging down over the stadium, to the atmosphere, the beer, the banter and the anticipation.

Did you know?
The image of Martin O'Neill that hung over Wembley was taken by world renowned photographer Hamish Brown and it turns out he is an Aston Villa too. You can see the original image here, with quite a few more. Maybe he could put a good word in with Messi?

A few of us that use this site also had a few beers the day before in the Sports Cafe in Haymarket and I'm still trying to figure out how I ended up waking up in a different hotel to the one I slept in the night before and where I had left all my stuff and had booked for a couple more nights. But one day, it will come back to me.

This was probably the biggest thing that happened to Aston Villa in 2010 and it came as a shock. It could also not have happened at a worse time and while one day, it would be nice if we were told why, I don't expect we will ever be told how it came about, although we all have our opinion on it.

But Martin O'Neill leaving wasn't a bad thing, when you look at the bigger picture. At the same time, he brought stability to the club and for that he should be thanked. He also came close and with more money, it might have happened. He didn't get the money and that might be why he left, but we will never know.

It is at this point that I'm going to mention Kevin MacDonald, because when called on to step up, he stepped up. He put faith where it should have been placed and it was clear as day he had the support from the players. If he is called on again to step up, I'm sure he will and next time, it could be the big step up. MacDonald gets a side mention, because he is Aston Villa and that was important.

Now, this is my list, so I'm putting this on it and you might be surprised that a match is getting added, but it was a fantastic match. It was one of the best matches I remember watching and not just because of the football, but because of the players.

Aston Villa 2 Manchester United
It comes down to belief and we had it in spades today. We played in a way that I've not seen Aston Villa play in a long time and it wasn't just about desire. It was about skill, intelligence and ability. I hope it continues and I hope we continue with the players that made it happen.

We outplayed Manchester United for most of the game and you could say that the changes made my the manager changed the game, but it was Manchester United and they would have played until they got an equaliser.

The match is just a vivid memory and while things have not continued how we would have liked from that match, the performance showed that some of the younger players are capable of stepping up. There is real quality at our club coming through and they need to be nurtured and coached and shown the right way to play.

So, three things that stand out for me from this year. You'll probably have three more and we could all find three more, but what about next year?

Aston Villa can have a good year next year too. It comes down to believing it and wanting it and setting the right targets and knowing what is possible and what isn't.

It is about having the right people at the club and I think we have better people at the club today than we did last year, but they still need support. Next year is going to be a big year for Aston Villa. I believe it and I'm looking forward to it.