A big week, a little romance and tickle my tummy, we're sixth

We haven't lost and we are sixth in the table so I've decided to take a different approach with the blog this week and possibly for longer. Hand on heart, I'd have taken sixth five games in before this manager was appointed and while the performances have looked far from convincing, I'm a big fan of this next statement; the table doesn't lie.

If you live by the sword and all that, I suppose we have to accept what we've got is what we've got. But, this isn't me eating humble pie. All things considered, we were lucky to get a point at the weekend and we are a long long way off moving forward - we are just very close to hard to beat.

The approach I'm going to take is one of standing back and not getting flustered with individual views of the manager or the football or what a player has to say or doesn't.

A chance is a chance

The manager deserves a chance and while what we are seeing now is pretty much what he served up at The Clowns for three or four years, it doesn't mean it is exactly what we are going to get. It could just be that what he served up for them was the start of the process and coming to us, he is going to take it further,

It could be that he is following a curve. It could be that the club hired a firm to map the careers of the 20 most successful managers in the modern game and modelled how they got to where they are, then through that model on top of the current crop of managers to see who was closest to the curve.

A point made against Newcastle

So, to the match. Did you see it? Swap Shay Given with any keeper and we could have lost that game and he rightly won man of the match with 55% of the votes. 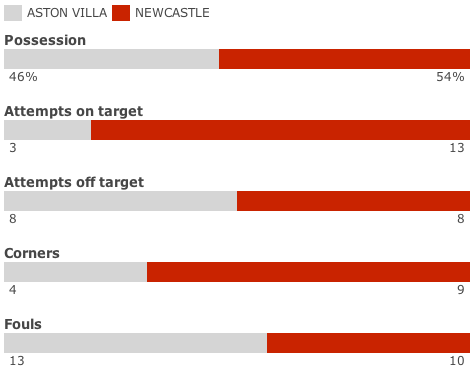 Now, the statistics above are from the BBC and they are probably different to what you will find from Opta, but they hit home how I think a lot of people feel. We were the home side and we struggled. We didn't create as many real threats on goal as we should have done, although Darren Bent could have done better with what he had, but that only means he is die a goal or three very soon.

We also didn't have as much of the ball as most would have liked, but we got a point. We are sixth. Imagine what could have happened had we had the possession Newcastle had and then imagine that is where we are going to end up.

Try to also imagine, Barry Bannan and Marc Albrighton both getting ninety minutes - it can surely just be a matter of time before it happens.

So, that is my post for the day and tonight I'm going to start another, which is going to be very Aston Villa, not 'news' Aston Villa and it will probably have a quite a few links to the League Cup and the romance of football - seeing as we have Bolton tomorrow and QPR at the weekend.

For now, I've got work to do and it is the not nice work of having to build something out of words - not something I've really done much of over the past few years and something that takes time to get right, even at your peak. Should be a big week.