The Aston Villa Team of our Generation

I've sat on this long enough, so here are the results and if the picture above didn't give it away, the details are below. I've used a traditional 1 to 11 for the numbers, only because it was easier for me and if you are interested, you can download a desktop wallpaper of the image above at the bottom of the post.

Team of our Generation

1 Mark Bosnich: Joined from Manchester United, the best keeper I have seen at Villa Park and dare I say it, could have been so much more, had he stayed and fulfilled his potential. Instead, his head was turned by the lure of three in a bed romps with Dwight Yorke and free bags of cocaine from his ex-girlfriend. He did okay for himself though and will be fondly remembered by many of us. Bosnich picked up 59.5% of the votes for best keeper.

2Olof Mellberg: Cards on the table, I'm very happy he made the team. Right back wasn't his preferred position and you could argue he wasn't the best right back over the past two decades, but you could argue many things about this list. One thing nobody can disagree on is his determination, fight and desire to win. Sometimes a team needs that just as much as they need a talismanic player. For the record also, he would make my team every week. Mellberg picked up 55.9% of the votes for best right back.

3Paul McGrath (Captain): What can I write about this player that will do him justice? There isn't much, so I'll use the words of Jack Charlton instead. "Paul McGrath is one of the all-time greats," the former Republic of Ireland manager once said of his star player. "Someone to compare with Bobby Moore." Again, for the record, he is the first name down on my team sheet. Every time. God picked up 71.6% of the votes for best centre back.

4Martin Laursen: If only. If only he didn't have the problems he had with his knees I fancy we would be speaking about him now in the same way we speak about Paul McGrath. I fancy he'd still be playing and I also fancy we'd be much better for it. Still around and he pops in every now and then, if I had thirty wishes, I might wish him a new knee. Laursen picked up 58.8% of the votes for who should partner Paul McGrath.

5Steve Staunton: Scored on his debut, helped us win the League Cup beating Manchester United in 1994 and loved the club so much, he came back for a second time. Despite many thinking he is a red - he played most of his career with us and if you ask him where his fondest memories are I have a feeling he'll say Aston Villa. Staunton picked up 58.9% of the votes for best left back.

6Ashley Young: This one surprised me a bit, but we did see his best football for us in the previous decade and he won us some games all by himself. He works hard and on his day he can inspire. we haven't seen much of it recently, but that doesn't matter for this vote. The votes are in and second place in this vote was going to get in the team. I'd love him to stay with us, but I fancy he is off this summer and when he looks back in a few years, I think he will regret it. Young picked up 20.9% of the votes and came in second behind Paul Merson for best supporting midfielder/wide man.

7Gordon Cowans: This one surprised me a bit also because his main spell with us was in the 70's and 80's but I think it just goes to show what sort of impression he made as a player and while I didn't see him much, I've seen the footage and I've heard the stories. Someone told me last week that if we had Gordon Cowans at his peak in our team now we'd be a different team and I believe them. Cowans came in first with 23.3% of the votes for best central midfielder. His partner is below who came in second.

8Ian Taylor: This one didn't surprise me and again, a name I would have on my team sheet every week without question. He is Mr Aston Villa and you might even be able to say 'one of us' which is rare these days. I spoke with Ian once and asked him about his most cherished moment and he told me it was the goal in the League Cup final. When I pushed him on it though, it was his first goal for Aston Villa, on his debut against Chelsea, at the Holte End. Tayls picked up 21.3% of the votes for best central midfielder and came in second behind Gordon Cowans.

9Paul Merson: This man could turn a game in a second and was, at times, magical to watch. I had a drink with him once, actually quite a few and he won't remember but he was a lot of fun off the pitch. I was trying to think of a moment I could mention but there isn't one that stands out, apart from the headed goal where he got a kick (I seem to remember this happening) and started bleeding, because every time he played, there were moments. A great player who could spot things me and you couldn't after three replays. Merse won the vote for best holding midfielder/wide man with 35.9% of the votes, just ahead of Ashley Young.

10Dwight Yorke: Forget how he left and some of his actions, he was a special player and we made him what he is. The chipped penalty sticks out and there are so many goals, that it would take too long to mention them all. The way he left still leaves a bitter taste, but this vote wasn't about that and I'm actually quite pleased he won it for the right reasons. Yorke won this by a country mile, picking up 61.2% of the votes as best striker.

11Dean Saunders: There was only one club he would join when leaving Liverpool and that was us. That was how we were thought of in 1992 and how we will be thought of again. He was a natural goal scorer who just knew where the goal was but also played as a great striker alongside someone. Saunders came in second behind Yorke with 13.3% of the vote. Not the best but a deserved second p lace and a deserved place in the team as far as I'm concerned.

Might have said something silly once and got himself into trouble, but I doubt he will ever have to buy a pint anywhere near Villa Park and he brought us silverware, got us playing with freedom and passion and knew how to get the best out of players. My choice as manager and 39.3% of you thought so too. 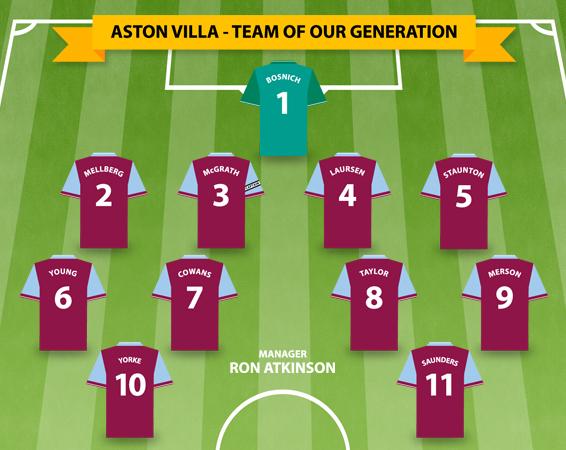 I have spoken with Stephen Doig, some of you might have heard of him but if you haven't he is an artist and is quite well known for his football work and has done quite a few Aston Villa pieces.

I've asked him if he would be interested in doing one for the team of our generation and if he does, I'm going to give one away here as a prize and we are also going to sell them for him from the site if anyone is interested. If you are, let me know below and if it happens, I'll let you know.

For the full results of all polls visit Footballocracy where you can now see the results of each vote, but for the record we took nearly 6,000 votes, which is a decent amount, so I will leave this tonight by saying thanks for taking part.

It was a bit of fun, but I also think we've done a good job of it. That would be my team above and I think most of us would agree too.