Steve Sidwell as you've not seen him before, Ashley Young starting for England, Petrov, Delph and Young

Not a rumour to be found today unless you count the few that we've heard before, so I'm just going to flirt over them. There you go, done. Although I have to admit, I really wouldn't be surprised if Twitcher comes out and comments about our Ashley again before the end of the transfer window again.

But I tend to agree with Doc, in so much that if he puts in a good performance tonight, the value will just go up and it will just go to show that he is too good for Spurs.

When I talk about tonight, I mean that Ashley Young will be starting for England against Holland. It is only a friendly and it does come at a horrible time, but it is an opportunity for him to impress and one of a few he is going to get during the build up the World Cup in South Africa next year, so he really will be out to impress tonight and we could be in for a blistering performance from the lad, as we all know he is capable of it.

I don't actually like friendly internationals and tend to stay away usually as I feel they're a waste of time, but I'll be watching tonight, mostly because if he does perform, it could be quite exciting.

In other news, Martin O'Neill has spoken about Petrov, Luke Young and Fabian Delph. Hopefully they might all be fit for Saturday.

Martin O'Neill on Luke Young
Luke has trained today. That is pleasing. It has been a very frustrating pre-season for him. He came back with plenty of determination after recovering from his previous injury. Yet he's been unable to play a single game.

Martin O'Neill on Fabian Delph
Fabian had a sore foot after the Fiorentina game. I would have been expecting a call from the England under-21 physio if there was a further problem. Hopefully Fabian will just play one half of the game tonight and come through it.

Martin O'Neill on Stiliyan Petrov
In terms of Stiliyan, I would like him to be fit for Saturday if at all possible.

It is all positive stuff and while we have cover for all three players and to some extent Delph might not be considered someone who will start every game, it would be nice to see all three put on claret and blue on Saturday. 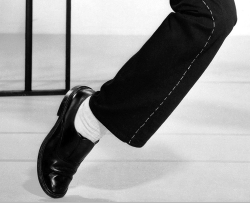 Moving on to Steve Sidwell and in a recent interview on ChannelBee, when asked who he do on Stars In Their Eyes, he confessed to Jail House Rock from Elvis, so just in case he wanted to see how he would look, click the image.

Hopefully it will open up for you, if not click here.

That is about it for now I think, But I will be checking for updates and if on the off chance we hear something from the club on a new player, we will, as always, let you know.

I'm off for coffee and a quick lesson in dragging cable round a house to put some internet cable in.