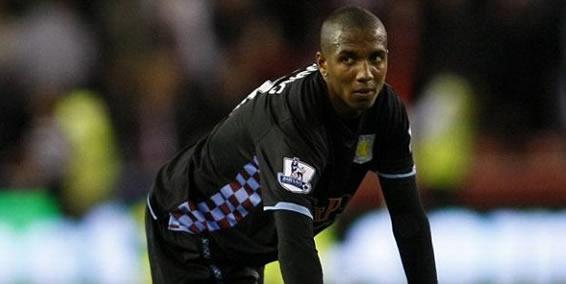 Ashley Young hasn't really said anything about what is going to happen and I've resigned myself to accepting this is going to be the talk of the summer, so we might as well get it out of the way now.

I'm getting it out of the way now because a paper has exclusively revealed today that Ashley Young has already told other Aston Villa players that he wants to leave in the summer.

Daily Mail
Young is a long-term target for Sir Alex Ferguson, who views the 25-year-old as a successor to Ryan Giggs and Sportsmail understands Young has already told a number of Villa team-mates that he wants to move to United.

He could cost as little as £10million in the summer after being valued at £25m at the start of the season.

Right, this is the Daily Mail, so believe what you want to believe but the player has spoken to us on this subject and just so we are clear about what he has said, it is below.

Ashley Young
I've told the people at Villa that I won't be signing a new contract at the moment. I know they want to get it done now but my current deal still has a year to run after this season and I feel there is plenty of time to talk next summer.

I want to stress that I have no problem with Aston Villa. I love the fans and I'm very much enjoying my football. I want to concentrate on what's happening on the field and don't want to get distracted. It's a big season for me and I'm hopeful there are good times ahead under the new manager.

What did he say and what is going to happen

I can't see into the future but I wouldn't be surprised if Ashley Young left this summer. I'd be surprised if Sir Alex Ferguson saw him as the successor to Ryan Giggs, because he isn't that good and if I know this I fancy Sir Alex knows this too.

Don't get me wrong, I think Young is a very good player that can, on his day, change a game. The thing is, we know that those days do not come along very often. Maybe it could be that Sir Alex will be able to get the best out of Young and maybe Sir Alex knows that and maybe, Sir Alex might actually see him as the successor to Ryan Giggs, but I doubt it.

But if you read what Ashley Young said in October last year, it is perfect and at the same time, nothing. All he has done is keep the supporters on side and told anyone that is interested that he is ready to move next summer if Aston Villa can not convince him to stay. He has whored himself out.

And that isn't a derogatory swipe at Young. For the money he earns each week, I'd whore myself out and so would you. In fact, I do whore myself out. I'm a whore that sells his time by the hour, he sells his by the week and over four or five years, but he is a proper whore because he wouldn't join United if they offered him £25k a week and he has a madam.

So, he probably will leave in the summer but if my name was Randy, I'd allow a quote to be released along the lines of 'we've told Ashley that we will make him an offer in the summer and that we want him to be part of the club for many years to come. But I want to stress that if the player doesn't want to stay at the club we will have to let him move on if our valuation of £25,000,000 is met or his contract runs out.'

It wont happen and I'm only fooling myself, but we shouldn't let him leave unless we get a decent return on what we paid for him.

One thing is for sure however; if he was truly, fully committed to Aston Villa, the contract would be sorted by now. It also has to be said that I don't think it is a case that he desperately wants to leave, it just looks like he has had his head turned.

Yes, after writing that I feel a bit stupid. All things point to him leaving and if he does, it isn't really a big thing and I think he would be easily replaced by the current manager. I would just prefer it if he stayed because continuity is important and things are going to move forward next season. If he gave this manager time, he might get better.

At the same time, seeing as I've brought up the current manager, it could be that he is more than happy to let Young leave. Actions speak louder than words and the manager knows he has to say the right things about a player that could be leaving if he is to get the right type of money.