So, Robert Pires has signed. Nice. It is a good signing as he will bring something to the training ground and possibly the pitch that we haven't got and he is just a year older than Ryan Giggs and most of us would have Ryan Giggs in our team.

But it is time to move on from Pires, we have some speculation and it focuses on Juventus striker Amauri Carvalho de Oliveira.

Apparently we are interested and well, if Juventus sell him to use it so they can fund a move for Karim Benzema. I'd rather we had Benzema for six months on loan as this Amauri fella is 30 years old and hasn't got long left.

But that is just me and it is just speculation. Time to move to the news.

Moustapha Salifou, so bored with just picking up his salary and doing little else is under investigation for allegedly assaulting a journalist in his homeland of Togo.

This is a nothing thing and anyone that has spent any time in Africa will tell you that an assault charge is about $100 and not as a fine, but to make it go away and I have a feeling that Salifou has the money but also that it will cost him a little bit more because he has the cash - still, a nothing thing.

In other news, Fabian Delph is hoping to be back playing in January. This is a good thing, for the player but for Aston Villa as he needs a run in the team.

Gary McAllister has worked a lot with Delph and knows what he is capable of and I suspect that we will see him pushed straight into the first team on his return, or after a game or two for the reserves. 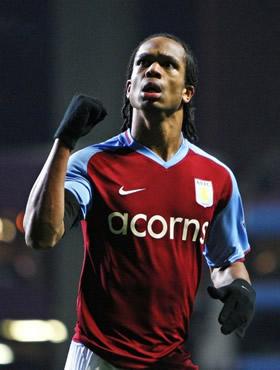 Right, I've seen a lot of chatter about this player the last couple of days, so we need to put it to bed. The other day, I wrote about how the manger has to have faith in some of our younger players and how he has to give them games but how he dropped The Fonz the minute Gabby was fit again, despite scoring and doing absolutely everything he should.

I am hoping this was a one off. You see, the manager is a big fan of statistics; he used them so eloquently put John Carew in his place and he will know that Gabby doesn't actually score that many goals for us, while Delfouneso has never had a chance.

It has to be a one off, because if the manager doesn't use this transitional season and doesn't give the younger players the real chance they need, instead bringing in the likes of Heskey, Petrov and Reo-Coker the minute they are able to play again, then as far as I'm concerned, the manager can leave.

Houllier isn't here for very long and if he is not going to use this transitional season to play these players, to give them a real chance, we are not really moving forward and very little is changing.

But, the bottom line as far as Nathan Delfouneso is concerned, while a very good prospect, is that none of us know if he will do the business. We might think we do, but until he has had a little run of three or four games and done nothing wrong and impressed enough to get a run of ten or twelve more games, none of us know.

He needs that run and if he doesn't get it, I'll be extremely disappointed for him and like I said, if the manager starts dropping players left right and centre as soon as others are available - I'll be disappointed in him too, but I don't think he is that stupid and I expect The Fonz to start on Sunday.