I am surprisingly chirpy this morning and I can only put it down to the result last night and the fact we are one big step closer to Wembley. Now, that step doesn't mean we are going to win, but anything can happen in a final and silverware is the best way to keep everyone happy.

But, it is only one step closer and we still have a match next Wednesday. I fancy all we need to do is score early and it will be enough. The goal last night gives us a huge advantage and with Blackburn scoring, on average, only a goal a game in the league this season, I fancy an early goal puts it out of reach for them. 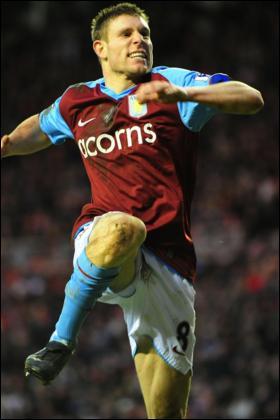 So, I'm not counting my chickens, but I have figured out I can make a big bowl of scrambled eggs if I wanted.

Moving on to some speculation and according to Simon Jones who writes as 'The Insider' on the Daily Mail website, Carlos Cuellar is a three out of 5 to move to Sevilla in the summer.

Now, it's fair to say that there will be the odd rumour linking King Carlos with a move back to his motherland, but I just can't see it happening at the moment. He is doing well with us, getting recognised in Spain and if that is happening with him playing in England, where is the value in moving back to Spain, probably to earn less cash with another club?

So, as you've probably guessed, this is going to be a quick post today, but before I go, did you know you could win VIP tickets to see Arsenal at Villa Park on January 27th, just by answering a simple question here.

So, before I go, I'm going to put it down a final time; is James Milner the next Steven Gerrard? Go one, go ahead and discuss and well done to whoever it was that suggested he'd be better in the middle - opened a few eyes that did.

I only ask because we know he can run and run and the goal he scored last night, for some reason, reminded me of Steven Gerrard. Maybe I'm wrong, but my views on James Milner as a winger are well documented and my views on him playing in the middle are also quite clear. More of what we saw last night from Milner and Barry might not even make the plan to South Africa.

I'm off for some food, for some reason I am craving bacon and eggs.