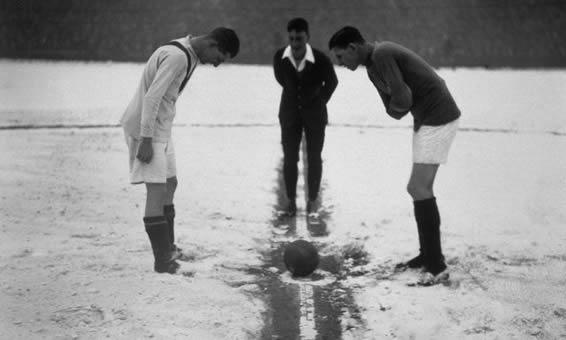 I was just about to put up my match post and I've found out the game is called off and not because the pitch isn't playable, but because there is a little snow on the ground outside.

Wigan have taken advice from the Police and decided that 'freak' weather is reason enough to call off the game.

The game between Wigan Athletic and the mighty Aston Villa at the DW Stadium has been called off after freak weather conditions in the town overnight. The decision was made on the advice of Superintendent Stuart Ellison of Greater Manchester Police, on safety grounds, because the people of Wigan are soft and most of our players are out injured.

Despite the club’s best efforts to keep the game on, by bringing in snow ploughs and gritters, the ten inches of snow that fell overnight has made the surrounding area extremely hazardous for supporters travelling to the game and seeing as we have so many players out injured, this seems like too good an opportunity for us, so we decided to take the advice we requested. Public transport isn’t running, there are motorway closures and the general condition of the surrounding routes is treacherous. The DW Stadium playing surface is fine with the undersoil heating doing its job. The club wants to apologise for the inconvenience this causes.

So, with no football, we are left with news and speculation. The first bit of news is that Stephen Ireland has requested a move in January. This won't come as a surprise to anyone but I hope our owner now knows that he shouldn't be buying or selling players.

In other news, Fabian Delph, Stiliyan Petrov and Steve Sidwell have all resumed training. This is good news and I'm mostly excited about seeing Delph get a little run. He looked decent enough before getting injured and the talk was all very positive about him.

But there are two games left today and because of that, I do have a bet of the day. I'm having a cheeky fiver on Bolton and West Ham and if it comes in, I'm £70 up. Can't be too and for two matches.