An iconic Aston Villa image and not getting carried away

Weekends don't get much better than that. Not everyone, but quite a lot of us and me included, thought we were going to get spanked or at the very least put in the type of display that we all know we can.

And after the first half, it was looking like it was going to be a very depressing weekend, but something changed in the second half. More accurately I suspect, something was said in the dressing room at half time.

And I think it can be summed up by something Peter Schmeichel said about the players playing for Paul Lambert.

And it's a great feeling to win, but we won because Manchester City came at us and that really does give is our best opportunity.

But we shouldn't take anything away from the win because we deserved it and we earned it and as of right now we're one win from the top four with Hull next weekend. 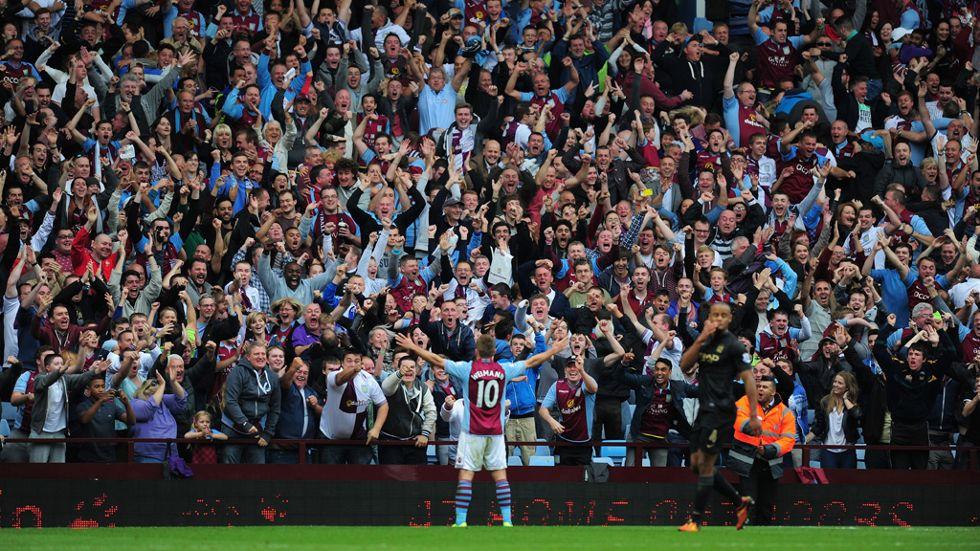 Not getting carried away

But this is a tough post to write because some will think I'm getting carried away, but I'm not. The season is going to be a lot like the match; a good half and a not so good half, but hopefully we can take the steps necessary that means the bad parts are not as often as they have been.

But, that isn't to say we can't get a little carried away. I mean, towards the end of last season we started to play some good football and things started to work as we all hoped it would.

And there is a change happening right now. I'm not saying we're going to see anything spectacular this season, but we are going to see things change a just a little.

Mourinho is trying to do something that might work but isn't sustainable and we all know he wont be the manager long term. Manchester City are going to change manager as often as Chelsea and again, it isn't sustainable. Arsenal on the other hand have shown that a sustainable position is a profitable one.

Changing of the guard

The change is coming and it's blended one. You need your youth and your potential, but you also need the two or three players that really strengthen what you've got and bring in something special. Ozil is one of those players for Arsenal and we don't have anyone at the moment.

Which is why we're closer than you might think. We have the potential but sometimes we also need the finished article. But I'm not getting carried away, just enjoying the prospect of what one bloody good victory allows us to have.

It's also why Spurs stand the best chance in years of finishing in the top four and why also they need to. It's about sustainability and they've spent a lot of money this summer and their wage bill has increased.

As of right now, we're fighting pretty much where we should be fighting but I've always said, the most important part of the football team is the manager and if it's true, that the players are playing for Paul Lambert, that is a big first step.

And now, time for lunch and this is me not getting carried away in public.