I'm fed up reading stories about Gareth Barry and the most annoying thing is I know I am going to have months of it until this is sorted. What would be nice however, is if Gareth actually came out and told us his intentions for this summer.

Some might say he already has, but it would just be nice if he made it clear. Some might even say it would be the respectful thing to do, but I don't think there is room for respect in football and I think that is blarney.

Yesterday, I was convinced, well I had a feeling possibly brought on by the beer, that he was going to sign a contract extension, but after reading the story in the Daily Star this morning about him, apparently, wanting to go play for Arsenal, I've had a revelation. I've also decided that unless there is actual news and not just speculation, I am leaving all this Gareth Barry press alone from now on, as I fancy most of you have had enough of it too.

But, to the revelation. Martin O'Neill has said he would understand if Barry wanted to leave to play Champions League football. He has also said he wouldn't mind Gareth playing out his contract or accepting a new contract to stay at Villa.

Martin O'Neill, May 22nd 2009
We would like him to stay but we understand that he's been at the club for 11 years. If someone came in with the offer of the Champions League, then that's something that we would look at.

Even if he ran his contract down I don't think that's something that would concern us greatly and that might show that we would like him to stay.It's not a matter of us wanting to cash in because he's in his final year. If he said he was going to run it down and see it through, I would be delighted.

Last summer, the two clubs agreed a deadline and nothing got done so we all found out that Barry would be an Aston Villa player for the season. Then, in December it was confirmed that Barry would be staying until the end of the season and Barry confirmed he wanted to play Champions League football next season with Aston Villa. We don't have Champions League football.

So, does Barry want to stay with us for next season and maybe, instead of playing the occasional match in the Champions League, maybe, work to get the club that has made him a multi-millionaire into the Champions League? Does he maybe want to sit down and talk about a new contract?

Maybe, Gareth wants to fulfil his boyhood dream and play in the Champions League while he is at his physical peak and if a club playing in the Champions League, preferably the team he supported as a child, were to match the clubs valuation of him, then he'd like to leave and that he hopes the Villa fans, who he will always remember fondly and who will always have a special place in his heart, understand his desire to play at the highest level? 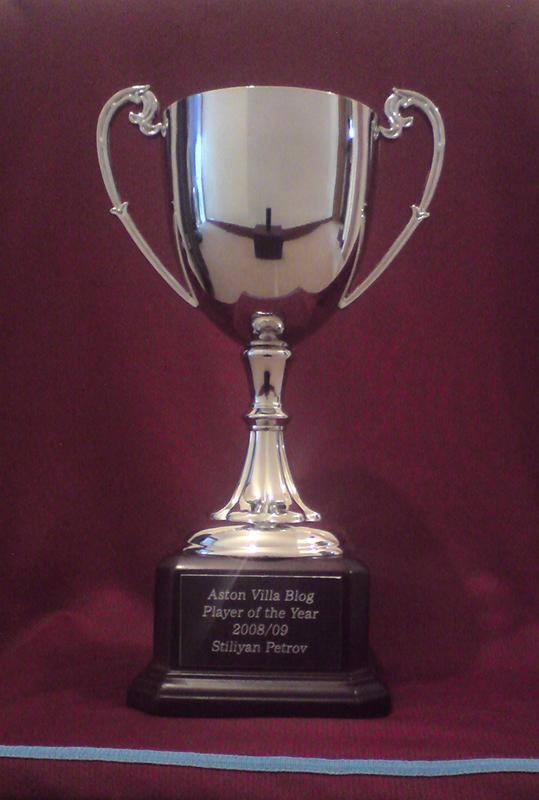 He could even say that he wants to leave and fulfil his boyhood dream, but if nobody can meet the clubs valuation, which he fully respects, then he'll stay and be 100% committed to Aston Villa next season. Even if that was all we got, we would know where we stood and it is sort of only confirming what we all suspect.

You know what, I don't care any more. If he stays, there is most definitely a place for him in the team (note how I've not said squad) and if he goes, then it is very likely that we will get someone in to replace him, but all this speculation and uncertainty can be quickly put to bed and I just wish it was.

But, before I go today, we have an award to give out. Actually we've given out the award and we were hoping to have heard from the winner by now, because we were sort of told we would, but we haven't, but it sort of also doesn't surprise us.

The award is for the Aston Villa Blog player of the season and its gone to Stiliyan Petrov. If you click the image, you'll see a bigger version, but basically it was dropped off at Bodymoor, as instructed and while we couldn't put it into the players hands directly, we sort of hope he has it, although I half suspect, based on what we've been told, that if he did actually get it, we'd have had a response by now and a photo. We haven't, so all we can do is show you what was sent.

Without going into detail, it's a bit like the Olof Mellberg interview we were going to do. We were told yes from the player, but then the club stepped in and blocked us doing it. I half suspect the club and I'm not naming names, have maybe just seen this and discarded it. Well, if they have, Stiliyan, this is for you, you are our player of the season.