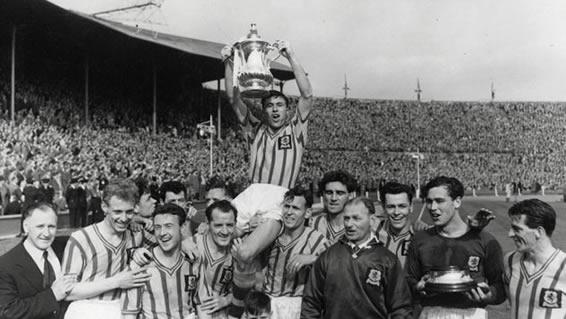 You don't get bigger days in the football season than today. Today is a special day. Today is the day where the away allocation increases, the teams from the lower leagues get the chance to play against a top flight side and today is a day of surprises.

It's a special day for me, but I suspect that for the younger football fan, it isn't as special. I only suspect it isn't so special and only because the game has changed so much since I was a young lad watching the build up on Grandstand. It could be that it is still special or can be special if someone takes the time to turn of the PS3 or XBOX.

The magic of the Cup

In 1984 Bournemouth beat Manchester United 2-0 and United were the current holders. In 1989 non-league side Sutton United beat top flight side Coventry City 2-1. In 1992, Arsenal were ten minutes away from victory, then Wrexham scored twice to knock out the holders. In 2003, former Everton captain Kevin Ratcliffe was managing Shrewsbury Town, 80 places below Everton in the league, but still managed to beat them 2-1.

These are just four recent matches and they all took place at this stage of the tournament. There will be an upset today too.

If we lose today though, it won't be considered a shock, although it should be. Sheffield United are doing almost as bad as us in the Championship and they haven't won since November. We've got to fancy our chances and while I agree with Petrov, that this tournament isn't that important this year, a win will be good for confidence and it should be seen as an opportunity to get better.

I fancy we will win today and while this match is, to some extent and unnecessary distraction for us, if we can win and we can strengthen the team next week - I'm fairly convinced Jean Makoun is coming and maybe one other - then it could be that we can do quite well in this tournament and actually, playing a few more games can only be good for us, if we are going to use the squad.

Video of the Day

The third round of the FA Cup really is a special day and if you're over 30 you'll {rokbox title=|FA Cup Third Dound :: Aston Villa Blog Video of the Day| text=|love this video|size=|480 385| album=|demo|}http://www.youtube.com/watch?v=nq86haQn9iw&autoplay=1{/rokbox}.

As soon as we get team news, I'll update the page and you can also follow us on Twitter - for short, regular updates and if you want to watch the match, I have a feeling you'll be able to watch it here if you are not in Sheffield.

We will win today and we will put ourselves in the hat for the next round. More players will come next week and some of the trouble makers will be gone. Things will, very soon, get back to the way they should be.

I'm off for some bacon sandwiches, a big mug of coffee and I'm going to settle in for the day. FA Cup third round - a special day.