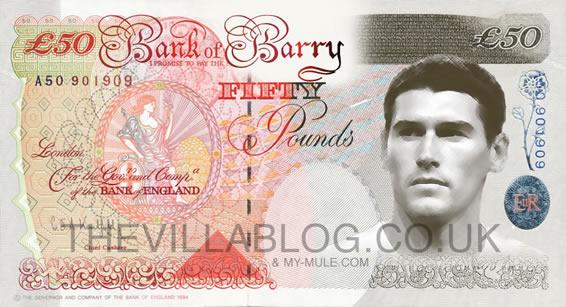 You don't get many bigger games than today. Okay, if it was Manchester United, Liverpool, Arsenal, Chelsea, Everton, Spurs, Stoke, West Brom, Wolves and even The Clowns, it would be bigger, but it is still a big game.

Manchester City are playing for a Champions League place this season and you know what, I think they will get it. But if you gave me a gun and a barrel of fish and told me to go fishing, I fancy I'd come back successful.

I'm not trying to belittle what Manchester City have done. Okay, I am, but if I'm perfectly honest, I wouldn't complain if Randy Lerner went out and spent £500mn and went all out to buy us the Premier League. None of us would.

Before we get to the match, we have some speculation. The big one is that Peter Crouch is apparently the man Gerard Houllier is interested in pairing Darren Bent with. I always liked Crouch and he was never given a fair crack of the whip at Villa Park and despite what many say, he does bring something to the table.

But Crouch coming would not be good for the likes of The Fonz and Gabby and while I think The Fonz would still get his chances, I think it could signal the end of Gabby.

The other bit of speculation focuses on Stephen Ireland and there is a chance he will be moving to Newcastle. The chance is slim, but I think he'd prefer it at Newcastle although I think he does have something to offer - I just think the club have to figure out what it is they have to do to make him play his football the way we all know he can.

During the match we will be using Twitter for updates, so if you are not already, follow us, but today, I will be doing my best to update this page too.

But seeing as the match is the late kick off there wont be much happening for a few hours, so I'm off for coffee, breakfast and I'm going to get some beer in the fridge.

But before I go, you know you can watch the match here if you can not get to Villa Park and if you fancy a bet on the game, the odds are below - including anytime goal scorer market.