Morning all. First things first, please remind me to never ever write a blog post that has Rangers and Celtic in the title. If ever you wanted proof that there is some real bad feelings between these two sets of supporters, just read this post where it all kicked off.

If anything it just underlined for me why we shouldn't allow Scottish teams into the Premier League - I mean, where do we then draw the line if Aberdeen come good in a few season time?

Anyway, back to Aston Villa and today we've got two more rumours. The first one I'd like, but I can't see it happening and his name is Glen Johnson and he currently plays for Portsmouth. The other rumoured clubs interested him are Liverpool and Spurs and if I were to put money on it, I'd say he will end up at Spurs.

It's not that Liverpool are not a more attractive offer in terms of potential, it's just that Harry Redknapp is at Spurs and he does have some pull and Glen Johnson has played well under him - so well, he was a regular in the England squad.

Like I say, I'd love him, but I'm also quite impressed with Luke Young and him coming to Villa Park wouldn't get him guaranteed football which he'd probably like. 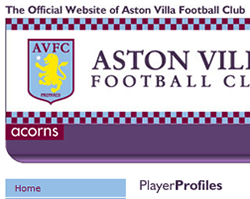 Moving on to the garage sale at Southampton and we are once again linked with South African born England U21 player Andrew Surman. He's a midfielder with a bit of quality and it's not surprising that we are linked because of his age. This time though, he's not touted as a replacement for Barry, that accolade is very much reserved for Fabian Delph, although I can't see it myself.

Some of you may not remember this and I'm not sure exactly when it happened, but I think it was around deadline day last summer, but Fabian Delph appeared on the club website with a player profile. I think this deal has been in the works for some time and if you wanted to put money on a player coming this summer, I reckon this one is a sure thing. Click the image to see how it looked.

Lastly today, the site is going to look different next week. All of your suggestions have been taken on board and we are struggling with the reply feature in the comments but pretty much everything else you asked for has happened, but you have one last chance to make any suggestions.

So, if you'd like to see any features on the new site, please let us know below and for those wondering, the white is going, even though I quite like it, but quite a few asked for it to be changed, so we're changing it and yes, expect a little more claret and blue.