A prediction or two and Crystal Palace tomorrow

I like Crystal Palace and I like South East London a lot and for atmosphere there are not many better stadiums in the Premier League, but it's become a tough place to go. But we won last time out and we can go their with confidence tomorrow.

And the manager has said this week that Gil and Grealish can play together and that they're available for selection, but from all the talk and comments I can't see anything about Adama Traoré. But this doesn't mean that Gil and Grealish are going to play together and if Traoré is to play you've got to fancy that one of those will give way unless the manager goes gorilla.

And by gorilla I mean if you're going to start with Traoré how can you play Gil and Grealish together? I mean that would mean only one striker (albeit you can easily argue that Traoré is a striker because that is where the club have added him on the squad page), but it means we'd be playing a sort of 4-3-1-2 and I can't see it happening (watch this space as this is now exactly what will happen tomorrow).

What I mean is this; Gil is sitting behind the strikers of Ayew and Traoré (sorry Gabby but you're job is to now come on when we're chasing a game) and then we have Grealish playing (another attack minded player), we've got to have two midfielders that have an eye on protecting the back four and that has to come from Westwood, Sanchez or Gueye. What happens to Sinclair, Veretout (both just signed) and Bacuna (new five year deal).

And don't ask me why, but I always think it's harder for midfielders to get used to the Premier League and I mean the midfielder horses, not the attack minded midfielders that are just concerned with creating chances, but the ones that need to be aware of everything. That could be why we have so many now.

Do you see what I mean about the manager having problems. Or could it be that Grealish and Gil will not start together and could just end up playing together every now and then? One thing is for sure, now that the manager almost has everyone available, who is he going to pick. I'm not going to predict that.

But I will predict the results off all the matches this weekend at Predikta. My predictions are below but if you click this link and sign up to play (it's free), we have a league and prizes coming up. Now, I'm going for a beer. 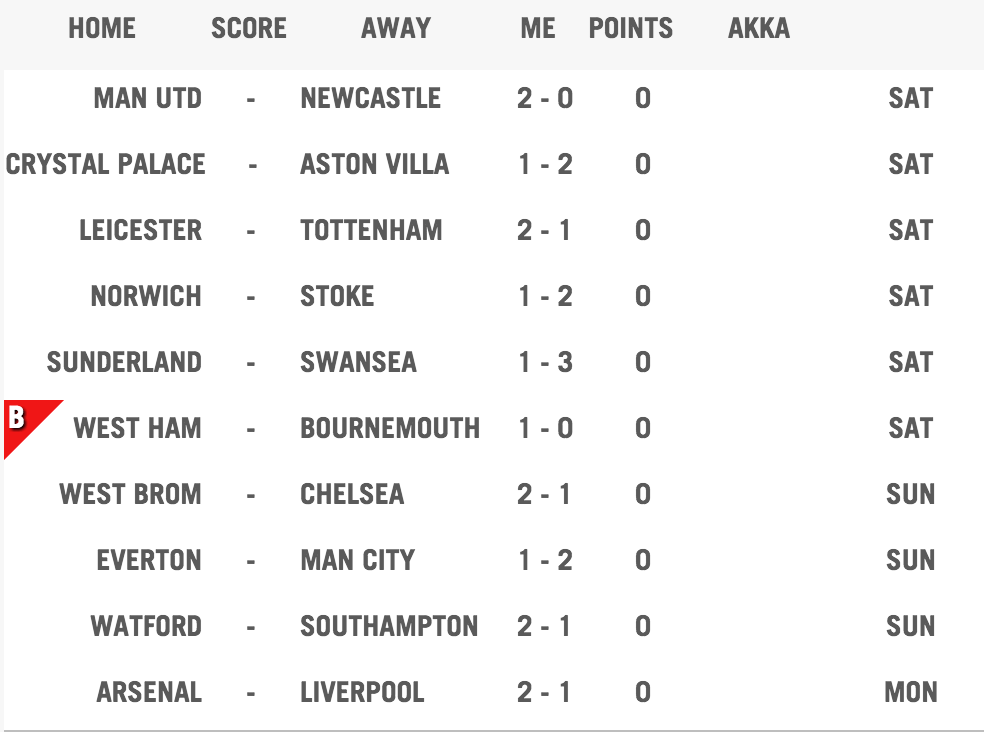